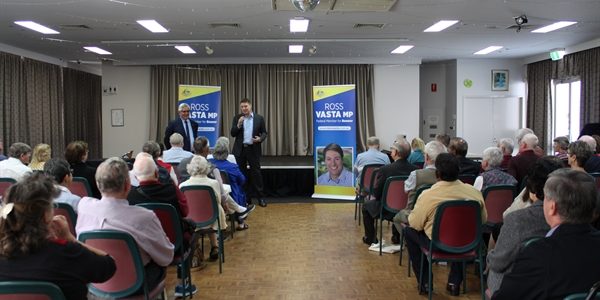 Over 70 locals from across Bonner attended a Seniors Forum in Mt Gravatt hosted by Federal Member for Bonner Ross Vasta on Monday.

Mr Vasta was joined by Minister for Aged Care the Hon Ken Wyatt at the event, who spoke on what the Government is doing for people in aged care and took questions from the audience. Stallholders from My Aged Care, PHN Brisbane South, Office of Fair Trading, Queensland Rail, NBN Co, and Mt Gravatt Men’s Shed also took part on the day.

Minister Wyatt told attendees the Government was delivering the biggest reforms to aged care in years.

Minister Wyatt also spoke on the importance of meeting the mental health needs of older Australians.

“We’re providing the largest ever single increase to mental health funding for older Australians, at over $100 million,” Minister Wyatt said.

Minister Wyatt also set out the scope of the new Aged Care Complaints Commissioner, and asked people with family members in aged care to contact him and share their experiences dealing with the aged care system.

Paul Williams from Carindale and his father Victor thanked Mr Vasta for holding the Seniors Forum and said it had been a good opportunity to learn useful information.

“We appreciate the opportunity to meet the Minister and Department representatives. The Minister has a great depth of knowledge about the issues people face. It’s clear he’s passionate about finding new ways to improve services,” Victor said.

Muriel Mitchell from Wishart said it had been a great forum and that the Minister had explained things very well.

“I learned a lot of useful information today about residential care and home care, and how I can look after my husband at home for longer,” Mrs Mitchell said.

“I’m very grateful to Ross for holding this forum and everything he’s done for us.”

Mr Vasta thanked attendees for coming along and sharing their views with him and Minister Wyatt.

“I’m pleased to be a part of a Government that considers older Australians a top priority, and I’m proud that in the recent Budget we were able to deliver for older residents in Bonner,” Mr Vasta said.