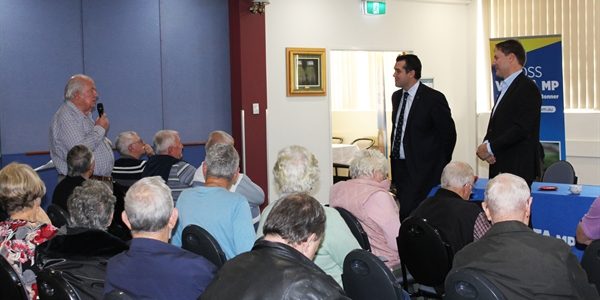 Over 50 Bonner residents attended a Pensioners and Retirees Tax Roundtable with Assistant Minister to the Treasurer the Hon Michael Sukkar and Member for Bonner Ross Vasta in Wynnum today.

“So many people have contacted me about Labor’s policy on franking credits and how this shameless tax grab will negatively impact them,” Mr Vasta said.

Mr Sukkar said many people were worried about Labor’s Pensioners and Retirees Tax, and said the Coalition would be fighting Labor’s proposal from now until the next election. He called on attendees and others impacted in the community to stand up and be counted and to spread the word to their friends and family.

“The Government is supporting retirees who have worked hard all their life and done the right thing by setting themselves up for retirement,” Mr Sukkar said.

“In contrast, Labor is proposing to tax retirees. This will leave retirees with less money to live on and disinsentivise younger Australians from saving.

“For over 3 years Bill Shorten has told Australians that he is fighting against the big end of town, when in reality he is doing the opposite. Labor has promised well over $200 billion in increased taxes and is intending to make retirees take on the largest burden of these tax increases.”

Betty Ollenburg from Wynnum said she had substantial concerns about Labor’s policy.

“As a self-funded retiree, it would affect my portfolio quite significantly. I may even be forced to dip into my capital to get along,” Mrs Ollenburg said.

David Dilger from Mansfield said he had been a third generation Labor voter until March this year, when Labor announced their franking credits policy.

“I’m scratching my head wondering how Labor could betray people like this. Their policy also affects young people and their ability to generate an income. And then for older people, there’s the question of whether Shorten will stick to the pensioner guarantee,” Mr Dilger said.

Tom and Shirley Tolland from Rochedale said it had been a very enlightening and informative session.

“It was good to hear many different points of view from people in different financial positions. The franking credits proposal affects us all so it was good to learn more about it from the Minister,” Mrs Tolland said.

Mr Sukkar said he and Mr Vasta would be taking attendees’ real-life examples to Canberra to further make the case against Labor’s Pensioners and Retirees Tax policy.

Mr Vasta invited people who wanted to share their stories or who had further questions to contact his office on 3893 3488.