Battle of the Bakeries in Pie of Origin Comp 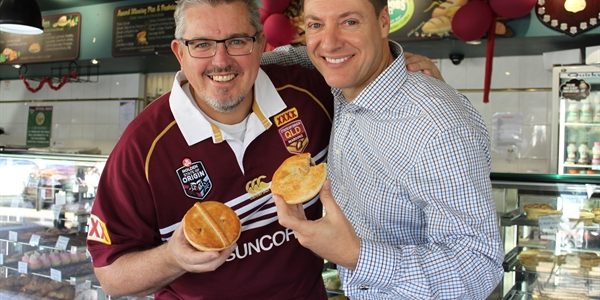 Uncle Bob’s Bakery in Belmont is pumping out the meat pies in a bid to take the title in this year’s ‘Pie of Origin’ competition.

Up against Glenorie Bakery in New South Wales, Uncle Bob’s is flying the flag for Queensland and aiming to raise some much needed funds for the Brisbane Children’s Hospital Foundation.

Federal MP for Bonner, Ross Vasta faced off in Parliament this week in a war of words with rival MP Julian Leeser, and encouraged all constituents to play their part and buy a pie from Uncle Bob’s.

“I spoke to the owner, Brett Noy, last week, and he's pumping out the meat pies, and I must say if you haven’t had one already you need to get down there. Not only are they supporting a great Brisbane charity but they’re damn delicious,” Mr Vasta said.

“So far it’s three a piece so we can’t be complacent. Taking out the 2018 ‘Pie of Origin’ comp will give us Queenslanders just one more chance to rub our winning streak in the faces of our Southern counterparts.”

Beginning in 2012 the competition so far has raised in excess of $90,000 for various charities in New South Wales and Queensland.

The overall winner will be announced following the final State of Origin game on the 11th July.