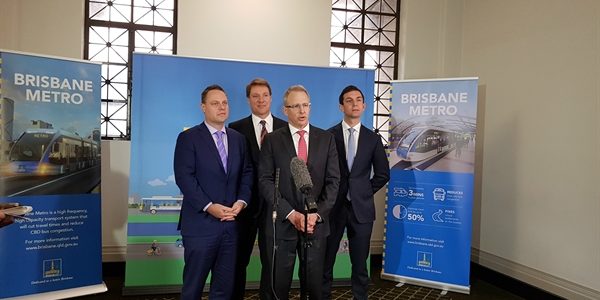 Construction of the Brisbane Metro is a step closer with more than 200 business leaders from local and international companies expected to attend a special industry briefing today (Wed 25th) to hear about the construction and employment opportunities expected from the $944 million project.

Acting Mayor Adrian Schrinner, who will address the briefing along with Federal Minister for Urban Infrastructure and Cities Paul Fletcher, said the specially convened briefing at City Hall would outline key milestones and opportunities and Council’s contracting model.

“We are gearing up to start procurement for the Brisbane Metro project that will cut travel times, unlock bus congestion in the CBD and improve services to the suburbs,” Acting Mayor Schrinner said.

“Brisbane Metro services will commence in 2023 and will revolutionise the way we travel, getting residents home up to 50 per cent faster on a high-frequency service, reducing bus congestion in inner-city streets and ensuring our city continues to thrive as a great place to live, work and relax.

“This briefing will provide local, national and international firms with the opportunity to start thinking about the skilled teams and innovation they could bring to the Brisbane Metro and kick start the delivery process of significant new infrastructure and a fleet of up to 60 Metro vehicles.

“Following the briefing, Council will commence the Expression of Interest phase for the main Inner City Infrastructure package including a new underground station at the Cultural Centre precinct and a new tunnel beneath Adelaide Street, as well as commencing an international Registration of Interest process for the fleet of 60 high-capacity Metro Vehicles.”

Federal Minister for Urban Infrastructure and Cities Paul Fletcher said the Turnbull Government was investing $300 million in the transformative Brisbane Metro project as part of its record $75 billion investment in key infrastructure.

“This project is a great example of how the Turnbull Government is investing in vital infrastructure designed to make our cities more liveable,” Mr Fletcher said.

“We are investing more than $20 billion in Queensland infrastructure which is possible because of a stronger economy.

“Whether it’s a tradie able to get to four jobs in a day instead of three, or a parent trying to drop the kids off at school on time, we want to ensure people are spending less time stuck in traffic and more time doing the things they’d rather be doing.”

Federal Member for Brisbane Trevor Evans said the project had been assessed as a High Priority project of national significance by the federal government’s independent advisor, Infrastructure Australia, in its 2018 Infrastructure Priority List.

“With two metro lines operating every three minutes in peak periods, Brisbane Metro will deliver a network of turn-up-and-go services linking the suburbs with the inner city and fixing major bottlenecks in the inner city that cause daily congestion,” Mr Evans said.

Federal Member for Bonner Ross Vasta said the Brisbane Metro would deliver a high-frequency metro network across 21 kilometres of existing busway linking the Eight Mile Plains, Royal Brisbane and Women's Hospital and University of Queensland Lakes busway stations and all stations in between.

“This congestion-busting project is great news for our community and shows the Turnbull Government is planning for and investing in the future of our city,” Mr Vasta said.