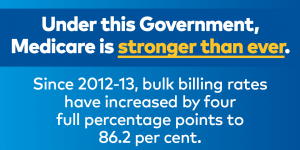 An increased number of Australians are attending General Practitioner (GP) appointments without reaching into their pockets, with GP bulk billing rates in Queensland under Medicare hitting a record high of 86 per cent for the full year of 2018-19.

Since 2012-13, GP bulk billing rates in Queensland have increased by over four percent from 81.6 per cent, proving Medicare is stronger than ever before under this Government.

Member for Bonner, Ross Vasta said the new GP bulk billing figures were “evidence more Queenslanders are visiting their doctor without having to pay a cent.”

“Australia has one of the best health systems in the world, founded on Medicare,”Mr Vasta said.

“These figures show Medicare, under the Morrison Government is supporting the health and wellbeing of Australians more than ever.”

Minister for Health, Greg Hunt, said the figures showed Medicare was “supporting the health and wellbeing of Australians more than ever before.”

“By increasing our investment in Medicare, the Morrison Government is ensuring it supports quality health care,” Minister Hunt said.

On 1 July this year, the Government increased the patient rebate for further GP items on the Medicare Benefits Schedule. Specialist procedures, allied health services and other GP services such as mental health and after hour’s services, were indexed.

The Medicare Benefits Schedule Review will ensure Medicare services are effective and appropriate for patients now and into the future.