Call for donations for drought-stricken farmers 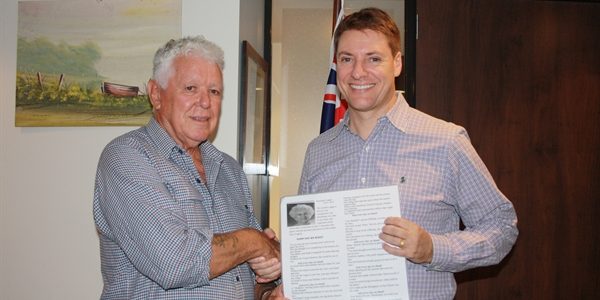 Federal Member for Bonner, Ross Vasta, today urged local residents and businesses to donate much-needed goods and supplies to farmers in South Western Queensland affected by drought, as part of a drive led by the National Malaya and Borneo Veterans Association.

“You can help out farmers and their families who are doing it tough by donating boxed non-perishable foods, toiletries, laundry products, cleaning items, and other goods for children including toys, games and books,” Mr Vasta said.

“My office in Wynnum is currently accepting donations, which will then be personally delivered by truck to farmers and their families out west.”

Mr Vasta said the next planned run in June, the third run since the drought relief project began, was dependent on the number of donations received.

He commended the National Malaya and Borneo Veterans Association along with other local groups for their joint effort in promoting the project and gathering donations.

Organiser David Brewer said the project was a worthwhile cause and that every single donation made a difference.

He stressed the donations were preferred already boxed to save on repacking time and to allow the goods to get to those in need sooner.

“We are also asking for more volunteers to assist in collecting donations from private residences,” Mr Brewer said.

“If we receive enough donations for the run to go ahead, we will also be seeking volunteers with vehicles that can transport up to 40 boxes to pick up donations from the drop-off points to deliver to our main storage depot in Sunnybank.”

Mr Vasta said the first two drought relief runs were very well received by farmers and their families, and he hoped enough donations would be made to make a third run out west possible.

He encouraged people to spare a thought for drought-affected farmers, and to read the poem that inspired the drought relief project, ‘Every Day We Bleed’ by Gary Fogarty (copies of which can be picked up at the office of Ross Vasta MP).

Donations can be left at the office of Ross Vasta MP, located at 69 Clara Street, Wynnum 4178.