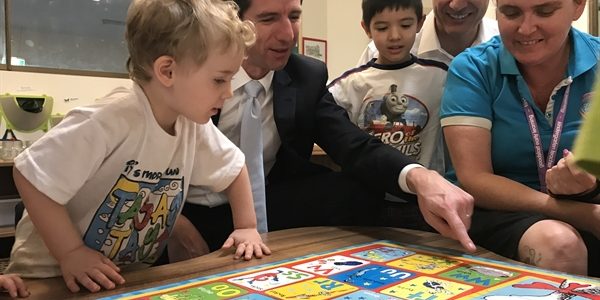 Over 6,500 families in Bonner will be better off thanks to the Turnbull Government’s child care overhaul.
Member for Bonner Ross Vasta said the new child care package will provide the greatest hours of support to the families who work the longest hours, and the greatest subsidy and financial support to the families who earn the least.
“We know the cost pressures that families face so we’ve taken action to overhaul a broken system,” said Mr Vasta.
“Families using child care in Bonner have told me that they need increased childcare support and my government is providing that relief.”
Minister for Education and Training Simon Birmingham said the child care changes are focused on helping the families that need it most, Minister Birmingham said.
“Almost one million families will benefit from our additional $2.5 billion investment and comprehensive changes to the subsidy system, our new hourly rate cap to put downward pressure on fee increases and the end of the $7,613 annual rebate cap,” Minister Birmingham said.
“With 1.15 million Australian families set to access child care next year it’s important families have the opportunity to plan for the changes.
“I urge families to visit our child care estimator, plug in their details and see exactly how they’re set to benefit.”
The Turnbull Government’s child care package includes:
• Increasing Australia’s investment in early childhood education and care by $2.5 billion so that almost one million Australian families benefit
• Introducing a better targeted activity test to ensure taxpayer subsidised child care places are targeted to those who depend on it in order to work, or work more hours.
• Delivering the highest rate of subsidy to those on the lowest income levels and more hours of subsidy to those who work the most. We’re increasing the base subsidy from around 72 per cent to 85 per cent for the more than 370,000 families earning around $65,000 or less a year.
• Low and middle income families, earning up to around $185,000, will no longer be limited by an annual $7,613 cap on the amount of subsidised child care they can access – that’s more than 85 per cent of families using child care and means families won’t run out of subsidy mid-year as happens now. Families earning more than around $185,000 will also benefit from an increased cap of $10,000.
• A $1.2 billion Child Care Safety Net will support vulnerable children and families who need extra support.
More information on the Turnbull Government’s new child care reforms can be found at: www.education.gov.au/childcare
Category: Media ReleasesBy Ross Vasta MP14 November, 2017