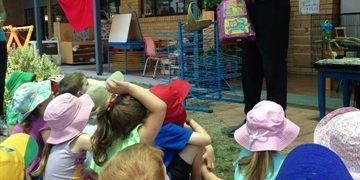 Over 2000 children in Bonner will benefit from the Turnbull Government’s National Partnership Agreement on Universal Access to Early Childhood Education.

Federal Member for Bonner, Ross Vasta said $840 million in Federal funding will be available for quality preschool programmes across the country, and that these benefits would be felt across Bonner.

“The National Partnership Agreement on Universal Access to Early Childhood Education guarantees funding for 600 hours of quality preschool in the year before school, and includes a focus on lifting participation rates for children from vulnerable and disadvantaged backgrounds in Bonner,” Mr Vasta said.

“All states and territories including Queensland have signed up to the National Partnership Agreement, which is extremely encouraging and means that the funding will flow to local preschools in Bonner.”

“This funding will help over 2000 preschool children aged between four and five who are enrolled at local preschools in Bonner get the best start in life.”

Minister for Education and Training Simon Birmingham said the National Partnership funding was just one aspect of the Turnbull Government’s commitment to early childhood education.

“As well as the $840 million for the National Partnership Agreement, the Turnbull Government has committed to reforms worth $40 billion for early childhood education and care over the next four years, including more than $3 billion to ensure the system is more accessible, affordable and fairer for families,” Minister Birmingham said.

“The funding is the single largest investment in early learning and child care that this country has ever seen, and guarantees support for 15 hours of quality preschool education a week for children in the year before school.”