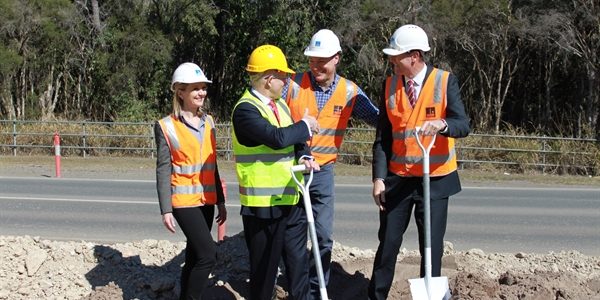 Construction has kicked off on the $27.8 million upgrade to the Green Camp Road corridor, reducing congestion and improving safety for motorists, cyclists and public transport users.

Lord Mayor Graham Quirk said the critical upgrade would widen Green Camp Road to a minimum of four lanes to get residents home quicker and safer, with more travel options.

“Council’s upgrade to the Green Camp Road corridor is one of more than 1000 road projects in a $2 billion investment that is taking real action on traffic congestion,” Cr Quirk said.

Federal Minister for Urban Infrastructure and Cities Paul Fletcher said the Turnbull Government is contributing $10 million to this important project, which forms part of a record $75 billion investment in key infrastructure, including more than $20 billion for Queensland.

“This upgrade will offer immediate benefits to all road users, as well as future-proofing the corridor by delivering the infrastructure needed for the growing Brisbane region,” Mr Fletcher said.

“The Turnbull Government is committed to investing in vital infrastructure that tackles congestion – whether it’s a parent getting the kids to school on time or a tradie able to get to four jobs in a day instead of three.”

“This upgrade will improve safety with signalisation at these traffic blackspots, reducing the risk of serious traffic incidents for daily road users,” Mr Vasta said.

“Motorists will also benefit from travel time savings in the mornings and afternoons.”

Federal Member for Bowman Andrew Laming said the upgrade would be a benefit to not only Brisbane residents, but also Redland City residents.

“This partnership between Canberra and Brisbane City Council is addressing a massive economic bottle neck and I’m delighted this high-quality project will expand the capacity of Green Camp Road, to benefit businesses and residents,” Mr Laming said.

Doboy Ward Councillor Ryan Murphy said in coming months, a number of traffic changes would be implemented to fast-track the upgrade.

“For several months later this year, a temporary full-time closure of Tilley Road, adjacent to Green Camp Road, will be in place, to facilitate structural intersection works,” Cr Murphy said.

“Residents will be notified well in advance of the closure, and the temporary measure will allow Council to deliver this upgrade more quickly, and reduce impacts to the local community.”

Construction is expected to be complete by mid-2019.

Improved access to My Aged Care for seniors
20 February, 2020

Get the facts about immunisation
20 February, 2020