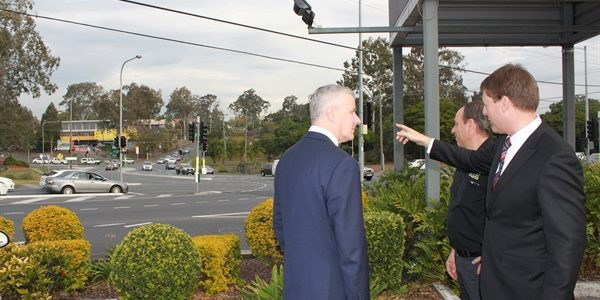 Deputy Prime Minister and Federal Minister for Infrastructure and Transport Michael McCormack this week visited the intersection of Newnham Road and Wecker Road to talk with locals and see firsthand the hazards present at the intersection.

Member for Bonner Ross Vasta said his petition to fix the intersection had reached almost 1500 signatures.

“Every day I hear from locals about another crash or near miss at this terrible intersection. I’ve been fighting hard in Canberra for funding and I’ve taken Minister McCormack out to inspect the intersection to see for himself the dangers it poses to commuters,” Mr Vasta said.

“I’ve seen crashes over there. There are accidents just waiting to happen. It’s really worrying, and I’ve got customers here who tell me the same thing,” Mr Lorenti said.

Mr Vasta urged local residents and business owners to sign and share his petition. The petition can be accessed at https://bit.ly/2rnVnUP or by calling 3893 3488.