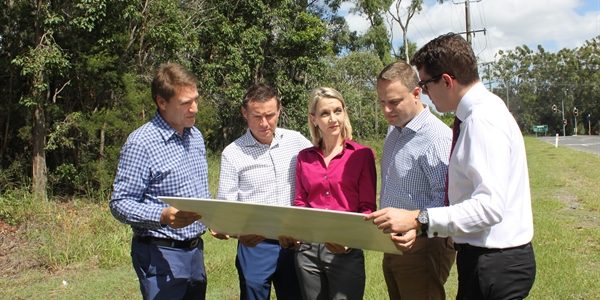 Brisbane City Council is getting on with the job of ensuring residents get home quicker and safer, with the final designs released for a major upgrade of the Green Camp Road corridor.

Infrastructure Chairman Amanda Cooper said the $28 million upgrade project, which was jointly funded with the Australian Government, would deliver vital infrastructure for our growing population.

“The Green Camp Road upgrade is a priority investment as part of our $1.3 billion package of more than 90 suburban road projects across the city, which will tackle traffic congestion while also catering for future growth,” Cr Cooper said.

“The section of road between Rickertt Road and Manly Road will also be widened from one lane each way to a minimum of two lanes in each direction, and three lanes northbound through the Tilley Road intersection.

“This will increase capacity for the corridor, which is already choked with traffic during peak periods, and cut travel times by around 50 percent in the morning and 35 percent in the afternoon.”

Chandler Ward Councillor Adrian Schrinner said the project would address serious safety concerns along the stretch, and was predicted to reduce crash risks through the area by more than half.

“Fifty-seven crashes have occurred along the corridor over the past seven years, with 46 crashes requiring medical treatment or hospitalisation,” Cr Schrinner said.

“A range of environmental features have also been incorporated into the design including fauna exclusion fencing, dedicated underpasses, rope crossings and glider poles,” Cr Murphy said.

“Green-coloured road pavement markings and signage will also be installed to alert motorists they are entering a wildlife awareness zone.”

Federal Member for Bonner Ross Vasta said the project would mean a safer trip for those who commute along the corridor, including cyclists and pedestrians and would ease congestion, helping to get people home quicker.

“The community’s support for an upgrade to these roads has been overwhelming. I’m proud to have helped deliver this project for them,” Mr Vasta said.

“I’m looking forward to working productively with each level of government to deliver more vital infrastructure projects like this one for our area.”

Federal Member for Bowman Andrew Laming said the collaboration between Brisbane City Council and the Australian Government would deliver huge benefits for residents.

“This partnership between Canberra and Brisbane City Council is addressing a massive economic bottle neck for my residents as well,” Mr Laming said.

“I’m delighted this high-quality project to expand Green Camp Road to four lanes is being delivered as promised to Brisbane City Council and Redland City residents.”

To facilitate the upgrade, a temporary closure of Tilley Road – adjacent to the Green Camp Road intersection – will be required for approximately three months.

This closure will allow culvert installation and Tilley Road widening works to be completed within a shorter timeframe, reducing impacts to residents and businesses.

Detour signage will be installed and the community will be given advanced warning to allow for alternative plans to be made.

Construction is expected to commence in mid-2018 and be completed by mid-2019, weather and construction conditions permitting.

For more information on the Green Camp Road corridor upgrade visit brisbane.qld.gov.au or call Council on 3403 8888.