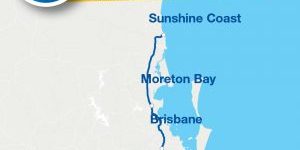 The Liberal National Government has taken the first step toward delivering fast rail between the Gold Coast through Brisbane and up to the Sunshine Coast.

The Morrison Government will provide $8 million to fund a business case for the corridor as part of its Population Plan to take pressure off the big cities, support the growth of the regions and bust congestion.

These detailed assessments will determine the next priorities for funding and construction.

Member for Bonner Ross Vasta said the fast train from the Gold Coast to the Sunshine Coast is one of five new fast rail business cases as part of our vision for the next twenty years to connect the big capitals and surrounding regional centres.

“This project forms part of the Government’s Plan for Australia’s Future Population to take pressure off the big cities like Brisbane and support the growth of the regions.”

Prime Minister Scott Morrison said the congestion busting investment in infrastructure would give time back to commuters and enable more people to live in our regions and work in our cities.

“As our population grows, fast rail networks are crucial to easing the congestion pressures in our cities and shaping Australia’s future.

“As well as reducing our migration cap and introducing new visas and incentives to encourage more migrants out to the regional areas that need their skills, our record investment in congestion busting infrastructure is key to tackling Australia’s population challenges.

“This is all part of the Australian Government’s plans to help Australians get home sooner and safer, and to share these benefits in regional Australia, by building strategic infrastructure projects that make a real difference to peoples’ lives, and enable the flow of people, trade and investment that is essential to having strong and successful economies in our regions.”

The Government’s 20-year fast rail plan invests $40m for detailed assessments of five additional corridors, complementing the three presently underway that the federal government has funded, and others that state governments are funding.

The Morrison Government will create a National Fast Rail Agency to guide the work, determine priorities based on the assessments, work with state governments and communities and the private sector and provide innovative finance solutions.

Minister for Cities, Urban Infrastructure and Population Alan Tudge said the fast rail plan was a critical part of the Government’s Population Plan.

“Fast rail from the big capitals to the regional cities eases the pressure off the big cities while supporting the growth of the regions,” Minister Tudge said.

“This works alongside other measures such as reducing the migration rate and encouraging more new migrants and students to settle in smaller cities and regions that need them.”