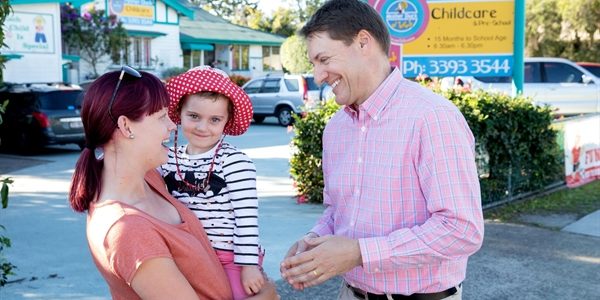 Bonner families are being urged to sign on and start their changeover to the Turnbull Government’s new child care and early learning system which kicks off in less than three months.

Federal Member for Bonner, Ross Vasta said with more than 7,500 families in his electorate set to benefit from the Turnbull Government’s new package, it was time for them to make the switch to the overhauled system starting on 2 July 2018.

“The online transition portal we’ve set up is live and it’s time for people to take action,” Mr Vasta said.

“With more support for more Bonner families just around the corner, families should visit www.education.gov.au/childcare and make the switchover as soon as they can so they’re ready for the new system from day one.”

Minister for Education and Training Simon Birmingham said the child care changes are focused on helping the families that need it most.

“Our overhaul of child care and early learning subsidies and extra $2.5 billion investment in the system will introduce hourly rate caps to put downward pressure on fee increases and abolish the annual rebate cap for most families,” Minister Birmingham said.

“Overall it will mean around one million families benefit and it’s estimated the package will encourage more than 230,000 families to increase their workforce participation.

“The biggest winners will be families working, studying or volunteering that earn less than $250,000 a year. Even if your family has a higher income, you’ll still stand to gain from our change to lift the annual rebate cap to around $10,000.”

Recent changes to the Consumer Price Index have also seen hourly rate caps and annual caps increase and will mean under the new child care and early learning package:

• Families earning up to $186 958, will no longer be limited by an annual $7,613 cap on the amount of child care they can access – that’s more than 85 per cent of families using child care and early learning and means families won’t run out of subsidy mid-year as happens now;

Important changes to improve the quality of aged care
24 January, 2020

Don’t forget to have your say on Lindum Crossing
24 January, 2020