INFRASTRUCTURE PROJECTS IN BONNER SECURE A STRONGER FUTURE FOR AUSTRALIA 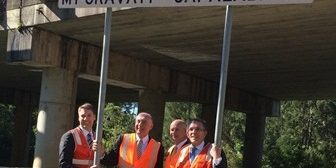 Bonner is getting a boost from the Commonwealth Government’s record $50 billion investment in road and transport infrastructure.

The Budget is the next step in the Government’s responsible, long-term economic plan to build a strong, safe and prosperous future for all Australians.

Through our nationwide infrastructure programme, the Government is creating thousands of jobs, reducing travel times and boosting economic growth nationwide.

This means that overall the Commonwealth’s investment in Queensland’s infrastructure will be $13.4 billion including $1.6 billion in 2015-16.

Federal Member for Bonner, Ross Vasta MP said that the funding would support much needed infrastructure projects throughout the electorate.

“These projects will create job opportunities, boost our local economy and make our roads safer for motorists and other road users,” Mr Vasta said.

Mr Vasta said that the following projects in the Bonner electorate would receive a portion of the Government’s 2015-16 Budget funding including:

The Government also recommitted its support for $70 million funding for the Gateway Motorway South (Mt Gravatt-Capalaba Road to the Pacific Motorway) project.

“This is more good news for Bonner,” Mr Vasta said.

The Government is building the world-class infrastructure that our community needs. These projects will deliver a modern transport network locally and unlock the economic capacity of Bonner.”

The infrastructure package contained in the Budget is about driving economic productivity, growth and jobs for a stronger future for Australia.

Further information can be found at http://investment.infrastructure.gov.au/projects/.