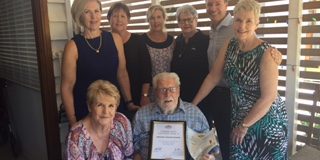 93-year-old Gregory Graham Perkins was today celebrated in honour of his commitment to Australia during World War II.

Mr Vasta said it was an honour to be able to personally recognise Mr Graham for his dedication to this country.

“Many Australians have given so much serving our great country, often even their lives, which is why it is so important to recognise their personal contributions.

“Veterans have always held a special place in my heart and I am thankful that I had the opportunity to congratulate Mr Graham for his service during World War II in front of his nearest and dearest today,” he said.

Enlisting in 1942 Mr Graham served in the Australian Army as a Private in the 2/104 General Transport Company. Among other things he drove vehicles to transport and re-supply Australian Troops with rations, ammunition and stores supplies.

Nominated by his daughter, Mr Graham was very thankful and humbled to receive the Salute Their Service certificate.