Locals Lining Up to Have a Shoot at New Netball Courts 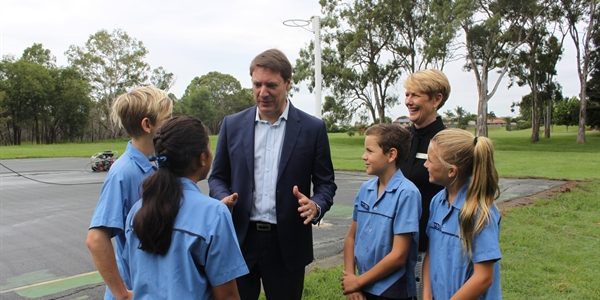 Wondall Heights State School’s new netball courts are currently undergoing some much needed resurfacing works and already they’ve got local groups lining up to take to the courts.
Thanks to the Federal Government’s Stronger Communities Programme, Bonner Federal Member Ross Vasta advocated for the school and secured $18,094 for the parents and community group to resurface the three courts.
Mr Vasta this week met with Wondall Heights State School principal Majella Frith to inspect the progress of the works.
“When Majella came to me and described the condition of the courts I just knew that I had to go into bat for the school to secure this funding.”
“The site is now two weeks away from completion and I can see it’s going to be a huge benefit for not only the 682 students here at Wondall Heights State School but also the wider community.”
Principal Majella Frith says this funding has been a saviour.
“The lack of courts in the area added with the very poor condition of the Wondall courts limited the growth and playing of netball in the local area.”
“The courts aren’t just used for school activities they are also utilised throughout the year for interschool sport carnivals and outside school hours care.”
“Since beginning the revamp we’ve had local clubs calling to book in times to use the new hard courts as well,” said Mrs Frith.
Weather permitting the new courts should be ready for use by the 26/03/2018.
[ENDS]
Category: Media ReleasesBy Ross Vasta MP12 March, 2018