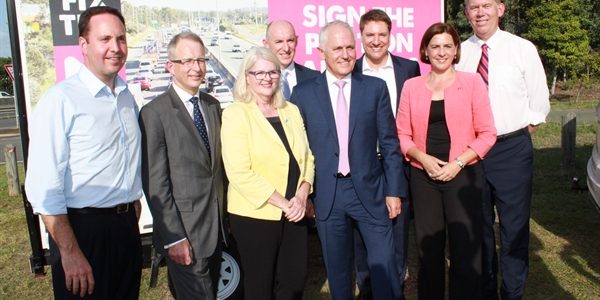 The Turnbull Government is acting to provide critical upgrades to the M1 Motorway to deliver safer, less congested roads for the people of Queensland.

Federal Member for Bonner, Ross Vasta said the $1 billion investment will mean people in Bonner spend less time in traffic and more time with their families, improving the quality of life for residents in his electorate and South-east Queensland.

“These upgrades will allow Bonner commuters and families to get to where they need to be quicker and safer, whether it’s work, school, or a trip down to the Coast,” Mr Vasta said.

“We’ve already committed funding to widen the M1 between Eight Mile Plains and Rochedale from four to five lanes, and construction is due to start soon. This project will also help reduce peak hour congestion for Bonner residents.”

“This work will ease congestion and improve safety, helping to future-proof the corridor against growing traffic demands.”

The Turnbull Government is committing $1 billion for the construction of two high-priority upgrade projects – one between Varsity Lakes and Tugun on the Gold Coast end of the M1 Corridor, the other between Eight Mile Plains and Daisy Hill within the Brisbane urban area.

The Eight Mile Plains to Daisy Hill project is expected to include widening the motorway from six to eight lanes, ramp consolidation, managed motorways technology, extending the busway to Springwood, supporting bus priority south of Springwood and better active transport connections between centres.

Consistent with other major infrastructure projects in urban areas, the Turnbull Government will make this commitment based on a 50:50 funding share arrangement with the Queensland Government for both projects.

Federal Minister for Urban Infrastructure and Cities Paul Fletcher said the M1 was one of the most important and heavily congested routes in Queensland with nearly 30 million tonnes of freight moving between New South Wales and Queensland each year and between 50,000 and 155,000 vehicles per day using sections of the M1 from Springwood to Tugun.

The Turnbull Government has previously committed funding to two projects on the M1 which are scheduled to commence construction in coming weeks: $115 million for the M1 Pacific Motorway – Gateway Merge and $110 million for the M1 Pacific Motorway – Mudgeeraba to Varsity Lakes project. These new projects will complement these two existing commitments.