The Coalition Government maintains its commitment to fund measures that will improve safety near the Minnippi Parklands in Tingalpa.

Federal Minister for Justice, Michael Keenan joined Federal Member for Bonner, Ross Vasta, and Councillor for Doboy, Ryan Murphy at Minnippi Parklands to discuss the Government’s funding of $70,000 for the area.

Mr Vasta said the Government had delivered on its Budget commitment to provide the funding in a significant boost for community safety in the Minnippi Parklands area.

“The measures this funding will help provide will deter anti-social behaviour, and provide a safer and more family-friendly environment for the community,” Mr Vasta said.

“They will build on existing measures taken by Brisbane City Council and the Queensland Police Service to improve safety in the area.”

Mr Vasta commendd Cr Ryan Murphy and the Queensland Police Service for their continued efforts to address crime in the area.

He also thanked members of the Tingalpa Model Aero Club who were in attendance for their support and assistance in implementing the new safety measures. 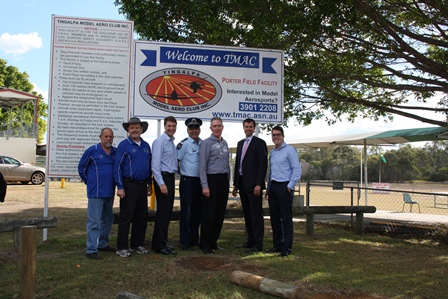