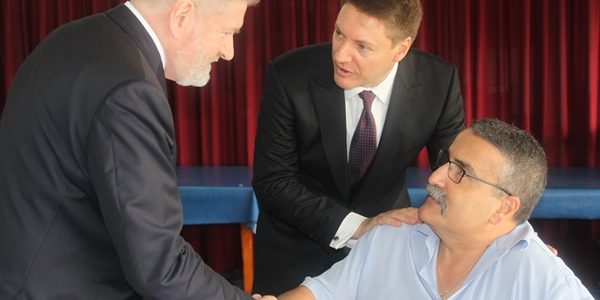 The Telecommunications Industry Ombudsman Report released today has revealed that the number of overall complaints made in 2016-17 about the nbn makes up just 1% of the total number of households connected.
Bonner MP Ross Vasta says the rate of complaints remains in line with the increased rate of the rollout.
“Yes there are complaints but the rate is low, and more importantly I am committed to assisting the people of Bonner to fix any issues they have.
“I’ve taken a hands on approach to dealing with each and every nbn complaint that comes into my office. So far I’ve held four nbn forums and a number of local mobile offices to assist constituents with any issues.
“I’m proud to say that over the course of the rollout so far working alongside nbn co and telecommunications providers I’ve been able to achieve a positive outcome in almost all cases,” Mr Vasta said.
Holland Park resident Cameron Dey says he approached Ross Vasta about an issue and he was overjoyed that he was able to resolve it within a day.
“Our internet was actually connected immediately after Ross Vasta got involved. I’m so thankful for his help! It's good to know that there are politicians like Ross Vasta out there who get things done.”
Judi Jones from the Telecommunications Ombudsman today revealed on Sky News that Nbn complaints only account for 17% of all complaints made to the TIO; it does not dominate their workload.
The report is great news for the Federal Government’s rollout of the nbn as they move
towards the 2020 completion date.
More than 35,000 households are connecting to the network every week, with a total of 2.4
million now connected Australia-wide.
Category: Media ReleasesBy Ross Vasta MP18 October, 2017