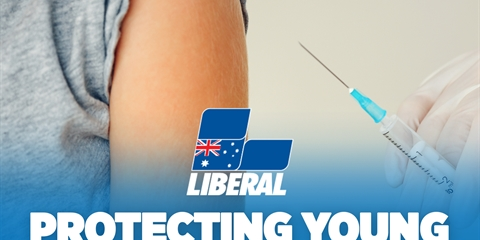 The Morrison Government will invest $52 million to protect Australian teenagers, including those in Bonner against meningococcal, with the launch of a new free national program for 14 to 19 year olds.

Member for Bonner Ross Vasta said over 1 million teenagers will receive the free meningococcal A, C, W and Y vaccine, over the next four years.
“It will be added to the National Immunisation Program from April 2019 and provided to students aged 14 to 16 years under a school based program.” Mr Vasta said.

“Adolescents aged 15 to 19 years of age, who have not already received the vaccine in school, will be able to receive the vaccine through an ongoing GP based catch up program.”

Health Minister Greg Hunt said meningococcal is a rare but very serious infection that occurs when meningococcal bacteria from the throat or nose invades the body. The consequences are devastating for individuals and their families.

“In recent years we have seen a rise in the number of invasive meningococcal disease cases in Australia. In 2017, there were 382 cases reported nationally, compared with 252 cases in 2016 and 182 cases in 2015.” Minister Hunt said.

“Deaths associated with meningococcal disease have also risen, with 28 deaths in 2017, compared with 11 deaths in 2016 and 12 deaths in 2015.”
“I am absolutely committed to strengthening Australia’s world-class national vaccination program and urge all Australian parents to have their teenagers vaccinated.”

This announcement follows a recommendation from the Pharmaceutical Benefits Advisory Committee (PBAC) to list the meningococcal A, C, W and Y vaccine for adolescents.

The Committee is independent of Government by law and in practice. By law the Federal Government cannot list a new medicine or vaccine without a positive recommendation from PBAC.

“From July 1, every 12 month old in the country is now offered a free ACWY meningococcal vaccine and every mother is given the opportunity to vaccinate against whooping cough with a free vaccine.” Mr Vasta said.
“Since coming into Government, the Coalition has helped improve the health of Australians by subsidising almost $10 billion worth of new medicines.”

“Unlike Labor, we are subsidising all medicines and vaccines recommended by the independent medical experts.”

“Vaccination works and is an effective and safe tool to prevent the spread of many diseases that cause hospitalisation, serious ongoing health conditions and sometimes death.”

“I encourage everyone to get the facts about immunisation by visiting: health.gov.au/immunisation”