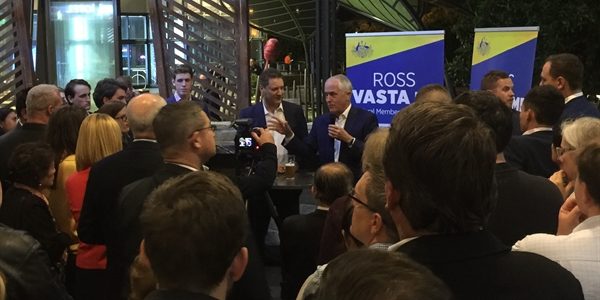 Local residents in Carindale flocked to take selfies with Prime Minister Malcolm Turnbull and local MP Ross Vasta after the two were spotted walking through the Westfield shopping centre.

Prior to a scheduled ‘Politics in the Pub’ event at the Carindale hotel, Prime Minister Turnbull and Mr Vasta took an impromptu walk through the food court stopping to talk to local families and school children and have photos.

The pair then headed into the Carindale Hotel to speak with locals about the recent budget and the latest employment figures.

Mr Vasta said it was great to have the Prime Minister in Carindale to speak with locals about the recent budget.

“This budget has been very well received by people in Bonner. Locals are telling me they are pleased that we’re getting the economy back to surplus quicker, providing tax relief, creating jobs and supporting older Australians.”

In 2013 we set a goal to create 1 million new jobs, and today we have achieved that milestone. The ABS labour force figures released today show that employment continues to rise. In the last year alone we have created more than 415,000 jobs and nearly 80 per cent of those jobs created have been full time.”

Attendees were given the opportunity to ask the Prime Minister questions. Their questions focused on NDIS, small business, and what the Government is doing for older Australians.

he Prime Minister assured Mr Strahan that the Coalition is committed to keeping tax refunds for franking credits.

“Labor is going to raid the savings of older Australians. They’re going to go after those franking credits that are so important to so many retirees with modest portfolios with blue chip Australian shares,” Prime Minister Turnbull said.

“Our Budget measures will protect older Australians and their hard-earned savings.”