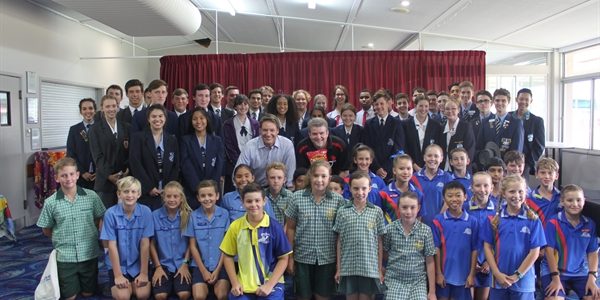 The students enjoyed a captivating talk by Red Frogs founder Andy Gourley and had the opportunity to ask questions about his work and what they could do to make a difference in their leadership roles.

“When we did this last year the students got so much out of it I had to hold it again,” Mr Vasta said.

“Andy is a superb role model for young kids and his story is an inspiring one everyone can learn from.”

Mr Gourley, a former Holland Park State High School student, spoke about how he started Red Frogs, and shared his general principles on being on a good leader.

“You can achieve a lot with others as long as you don’t mind others taking the credit,” Mr Gourley said.

“Learn the art of being second. Learn to champion others over yourself. Good leaders are culture setters—people will do as you do, so set a good example. Don’t be a whinger and never criticize others for not doing something if you’re not willing to either. And always be willing to learn from others.”

School captain of Mansfield State High School Clive D’Silva said one of his main goals as a school leader was to strengthen ties within the school community and the wider Mansfield community.

“Becoming school captain has motivated me to be the best version of myself I can be, so that I can set a good example for other students,” Mr D’Silva said.

Questions from students to Mr Gourley ranged from what inspired him to start Red Frogs, obstacles he’d encountered and whether he had any regrets, and the best reactions he’d had from people he’s helped, to how he inspired others to get involved.

Mr Gourley said he’d had people come up to him to tell him he’d saved their lives, and that parents had written to him to thank him for his work. He told the students to trust their gut, and that through consistent work they could transform small things into great things.

“More good leaders are needed through the education system, and to encourage this Red Frogs offers student leader training seminars across the country for schools and universities,” Mr Gourley said.

“I had a lot of great questions today—this is definitely a room full of leaders.”

Student leaders from the following schools attended the event:

Mr Vasta said he hoped the students had enjoyed their red frogs and had gotten the most out of meeting Andy and leaders from other schools.