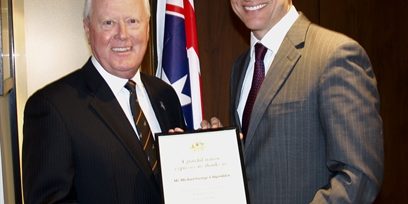 Applications are now open to nominate a worthy serviceman or woman for a Certificate of Appreciation under the Government’s Saluting Their Service Commemorations Program, Federal Member for Bonner, Ross Vasta said today.

Certificates of Appreciation are available to those who contributed to Australia’s efforts in the following conflicts and events:

Veterans and those who served in the wars, conflicts and peace operations for which certificates are available, as well as family members of deceased eligible persons, can apply for Certificates of Appreciation.

Application forms are available from Ross Vasta’s office, DVA offices or can be downloaded from the Department of Veterans’ Affairs website at http://www.dva.gov.au/dvaforms (click on Topics and select Certificate of Appreciation forms).