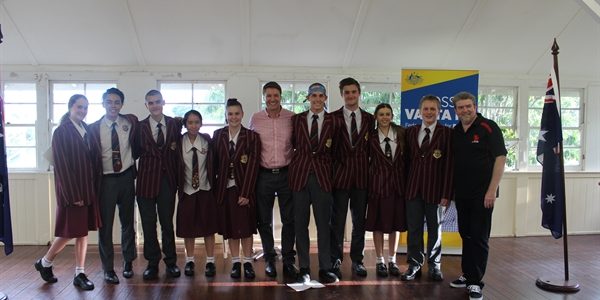 School leaders from all around the Bonner electorate were yesterday celebrated in a ceremony hosted by Federal MP Ross Vasta.

Manly West State School, Mt Gravatt East State School and Clairvaux College leaders joined with more than 40 students from other local Primary and High Schools to attend the event, and were treated to a moving motivational speech from Red Frogs founder and CEO Andy Gourley.

The students were captivated by Andy’s enthralling speech explaining how Red Frogs came to be the organisation that it is today despite its humble beginnings.

“In the very beginning all I was doing was offering a little time once a year to keep an eye on my skater mates who were attending schoolies.

“It doesn’t take much to make a huge difference the best thing to remember is doing something is always better than doing nothing.

Starting off at schoolies, Andy explained how Red Frogs quickly became a roaring success for the great work it does.

“Red Frogs now operates in more than seven countries across the world, with over $180,000 worth of lollies donated by Allens allowing us to hand out more than 2.5 million red frogs each year at events,” said Andy.

The students were astounded by the sheer size of the operation asking Andy a range of questions about how Red Frogs began 20 year ago and what he predicted for the organisation.

“Why did you pick red frogs to give out?”

“Was it scary starting Red Frogs 20 years ago?”

“If you didn’t start Red Frogs what would you be doing now?”

“Why did you choose to start Red Frogs?”

Andy finished with a simple quote to inspire the students going forward in their lives.

“Leadership influences others and passion creates change, so you need to become the change you want to see in the world.”

Local MP Ross Vasta said it’s great to be able to acknowledge the students for their leadership initiative and further encourage them to lead by example.

“It was wonderful to see such a strong turnout of student leaders in our community and to be able to connect them with such amazing influencers like Andy.”

“The students thoroughly enjoyed attending the Afternoon Tea hosted by Mr Ross Vasta MP.  It provided them an opportunity to meet and build relationships with other School Leaders in our wider community.

Principal O’Brien said the students and teachers also commented on how inspired they were after listening to Mr Andy Gourley and as a result how empowered they feel to make a difference in their own College Community.