SPORTING SCHOOLS KICKS OFF ACROSS AUSTRALIA 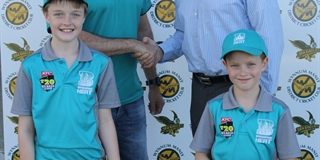 Federal Member for Bonner, Ross Vasta, today announced that 20 local schools in the Bonner electorate had signed up to be a part of Sporting Schools, the Abbott Government’s $100 million initiative aimed to improve children’s’ health through getting more primary school age students across Australia involved in physical activity.

Mr Vasta said Sporting Schools was launched on Monday 20 July and schools and sporting associations in Bonner could now take part in the participation-focussed programme.

“Being involved in this new programme will expand sporting opportunities for children before, during and after school hours at Bonner primary schools, as well as local sporting clubs,” Mr Vasta said.

’Sporting Schools is a core foundation of the Abbott Government’s Play.Sport.Australia. Strategy to improve participation in organised sport for people of all ages.”

“Through early involvement with sport starting from school and local community sporting clubs, children learn to lead an active and healthy lifestyle, as well as learning many life lessons from sport, such as resilience, persistence, sportsmanship and developing lifelong friendships,” Mr McPherson said.

“The opportunity to be awarded a grant via Sporting Schools will greatly help the volunteer community sporting clubs that I am involved with provide better resources to children that aren’t readily available from other sources of fund raising.”

Mr Vasta said only one third of children are managing the recommended hour of physical activity a day, with only half of our kids involved in sport.

“Every year 13,000 deaths in Australia are attributed to physical inactivity,” Mr Vasta said.

Mr McPherson said providing well skilled coaching early on during a child’s sporting journey is pivotal in keeping a child engaged in sport, increasing child/parent participation and the many benefits associated with a lifelong interest in sport.

The Sporting Schools announcement is supported by the release of a new online guide offering parents tips on how best to nurture their child’s interest in taking up a sport, as well as maintaining it as they get older.

The Australian Institute of Sport has also developed a new online guide offering tips to parents about how they can nurture their child’s growing interest in sport and convert it into a life-time love of participation. It was launched today in conjunction with the start of Sporting Schools.

Schools can still sign up for the Sporting Schools programme at www.sportingschools.gov.au, where a link to the online guide for parents is also available.