SUPERFAST BROADBAND ON THE WAY TO BONNER 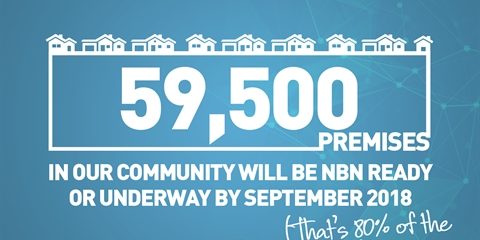 Superfast broadband is coming to more than 59,500 homes and businesses in Bonner under an accelerated three-year rollout of the nbn.

Across Australia the nbn is powering ahead with the release today of a comprehensive construction plan to network 9.5 million premises nationwide.

Today nbn is releasing its full construction schedule, providing Australians with the greatest detail yet on when the nbn will reach them.

The new rollout plan, which extends out to September 2018, provides a breakdown of when the network will be starting in specific locations and the type of technology that will be used.

Across Bonner thousands of residents will benefit from broadband upgrades as follows:

The release of the plan is a huge step forward for the nbn as the company works to speed up the rollout and make the build as cost-efficient as possible. The Coalition Government understands that internet access is important for our community and will transform education, health care and other critical online services.

Rollout progress under Labor was slow and costly. The nbn only managed to connect 51,000 premises to its networks during the previous term of Government. The Australian Financial Review editorial on Thursday 15 October said “Labor has no credibility in this area” and described Labor’s plan for the nbn as “an expensive joke.”

The Coalition Government recognises that consumers want fast broadband as soon as possible. All services over the nbn will allow families to stream movies, surf the web, and complete schoolwork online – all at one time. Businesses will also benefit from the vastly higher bandwidth available.

The plan demonstrates the Coalition has cleaned up the nbn mess left by Labor which would have left many Australians waiting a decade for better broadband.

Nationwide, more than 1.3 million homes and businesses can now order an nbn service and there are almost 700,000 homes and business under construction. Around 600,000 premises already have an active connection and are enjoying the benefits of very fast broadband. nbn is working to provide fast internet to every home and business in Australia by 2020.

I will continue to keep my community informed of the progress of this important project for Australia.

Residents can check their suburb at: www.nbnco.com.au/rolloutplan.