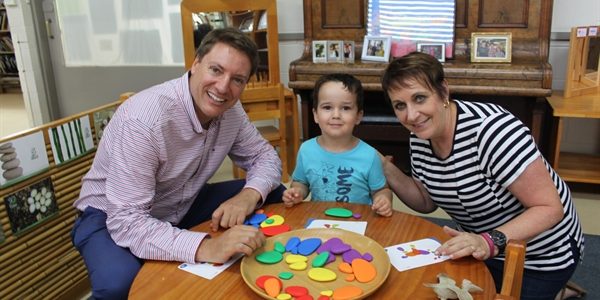 Families in Bonner are urged to make the switch to the Turnbull Government’s new child care and early learning system or risk missing out on the new subsidies.

New data shows that with just weeks to go until the new system starts on 2 July, around 48% of families have already made the switch.

“Families in Bonner need to make the switch by 2 July, or they could miss out on receiving the new child care subsidy,” Federal Member for Bonner Ross Vasta said.

“Over 7,500 families in Bonner will be hundreds if not thousands of dollars a year better off under our reforms but they need to make the switch to the new system.

“I urge local families and child care and early learning providers yet to update their details to visit www.education.gov.au/childcare as soon as they can.

“Even if your circumstances are likely to change before 2 July, just get online and get into the new system. Updates can be made easily at any point via your Centrelink online account via myGov.

“If you’re a family who can’t remember your myGov log-in or you need a little assistance, you can phone the helpdesk on 136 150. There are many staff on the help desk and call-wait times are very short at the moment.”

Minister for Education and Training, Simon Birmingham said while more support for more families is just weeks away, the switchover to the new system isn’t automatic.

“The Turnbull Government’s reforms are set to benefit almost one million families nation-wide and it’s estimated around 230,000 families will increase their workforce participation,” Minister Birmingham said.

“Our reforms include an extra $2.5 billion investment that will mean more subsidies for families working the most and for families earning the least, scrapping the annual rebate cap for most families as well as an hourly rate cap to keep downward pressure on fees.

Minister for Human Services Michael Keenan said the Turnbull Government estimates that around 489,000 families across Australia still need to update their details and switch over in time for the new system.

“Over the last few months we’ve been letting families know what they need to do to make the switch. While the deadline may have seemed far off in the distance for many people, now it’s just around the corner on 2 July,” Minister Keenan said.

• We’re increasing Australia’s investment in early childhood education and care by $2.5 billion over four years so that almost one million Australian families benefit – low and middle income families will be the greatest beneficiaries from the package.

• An activity test will ensure that taxpayer’s support for child care is targeted to those who depend on it in order to work, or work additional hours. It is estimated our reforms will encourage more than 230,000 families to increase their involvement in workforce participation. The activity test includes a minimum of four hours of working, looking for work, training/studying and volunteering

• Fundamentally fair – this package provides the highest rate of subsidy to those on the lowest income levels and more hours of subsidy to those who work the most. We’re increasing the base subsidy from around 72 per cent to 85 per cent for the more than 370,000 families earning $66,958 or less a year.

• Low and middle income families, earning up to and including $186,958, will no longer be limited by an annual cap on the amount of child care they can access – that’s more than 85 per cent of families using child care. Families earning more than $186,958 will also benefit from an increased annual subsidy cap of $10,190 per child.

• Our $1.2 billion Child Care Safety Net recognises vulnerable children and families need extra support. The safety net includes special funding for regional and Indigenous-focused centres to break down barriers to early learning and child care and 12 hours of guaranteed access to care/learning for families earning less than $66,958 even if they don’t meet the activity test, which could equal two six-hour sessions per week.

Examples of how families are set to benefit: