UPGRADE OF INTERSECTION AT RICKERTT ROAD AND GREENCAMP ROAD 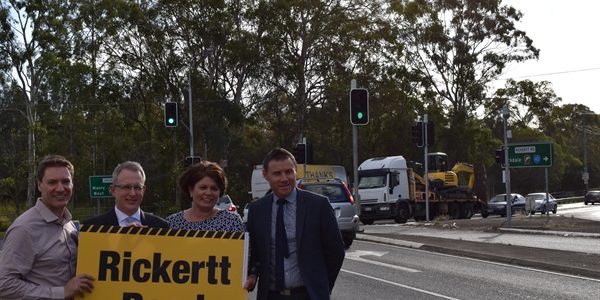 A re-elected Turnbull Government will provide funding for the upgrade of the intersection of Rickertt Road and Green Camp Road, relieving congestion for motorists in the electorate of Bonner and Bowman.

The Turnbull Government will provide $5 million for the upgrade which will be matched by the Brisbane City Council.

The funding will enable the re-phasing of traffic signals as well as the upgrade and extension of the dual carriageway.

The announcement was made today by Minister for Major Projects, the Hon Paul Fletcher MP, Member for Bonner, Ross Vasta MP, and Member for Bowman, Andrew Laming MP.

Mr Vasta said, “I’ve heard from countless residents and commuters in Bonner who’ve had issues with this particular intersection. After fighting for years on their behalf for this much-needed upgrade I’m pleased the Government is now able to commit this funding.”

Mr Laming said, “This upgrade transforms the commute between Redland City and Brisbane. The morning congestion in particular has caused frustration for around 15,000 Redland city families.”

The Turnbull Government is investing $13.7 billion in Queensland infrastructure and is spending a record $50 billion on land transport infrastructure nationally as part of our carefully structured economic plan to provide jobs and growth and a secure future for Australian families.