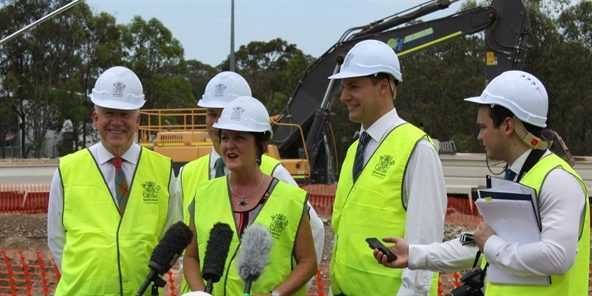 Work has begun on the Queensland State Velodrome Project – one of the centrepieces for the 2018 Gold Coast Commonwealth Games.

The Member for Bonner Ross Vasta represented the Minister for Sport Peter Dutton at a sod turning ceremony for the project at Chandler in Brisbane today.

The Australian Government is providing $156 million funding for the Games including the velodrome project.

Mr Dutton said most of the Australian Government’s investment, which will see it partner with the Queensland Government, is for new and upgraded infrastructure that will remain permanent after the Games.

“Such investment will ensure there is a lasting impact from the Australian Government’s contribution,” Mr Dutton said.

“Building a legacy not just for south-east Queensland, but for the nation as a whole, means we are getting maximum value for taxpayers’ precious dollars,” Mr Vasta said.

“Moreover, construction of the velodrome will create a large number of jobs, many of them local, while helping ensure Australia stages a truly world-class event.”

The $58 million velodrome will be located alongside the Brisbane Super Cross track at Sleeman Sports Complex and will provide a new centre of excellence for cycling in Queensland.

As Queensland’s first indoor velodrome, the world-class facility will attract elite training squads and competition events to further the development of cycling in Queensland and Australia.

The new velodrome will be more than just a track cycling facility. The in-field area will have the capacity to provide for a range of additional sport and recreation uses through mixed-use sports courts.

The velodrome is scheduled to be completed in mid-2016.