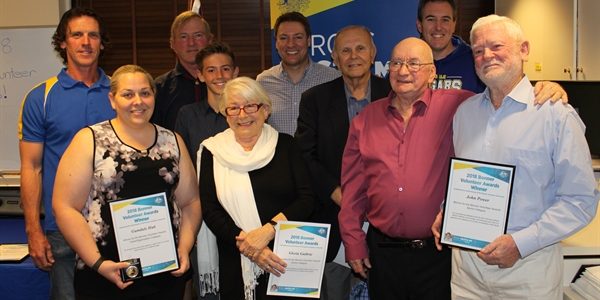 Federal Member for Bonner Ross Vasta today thanked everyone who has put in nominations for the second annual Bonner Volunteer Awards.

The Bonner Volunteer Awards recognise individuals and groups that have demonstrated outstanding volunteer qualities, made a significant and lasting contribution to the community, and set a good example for fellow volunteers and inspired others to volunteer.

“It’s great to hear about so many dedicated and hard-working volunteers in Bonner, especially during National Volunteer Week this week,” Mr Vasta said.

“These men and women are making a real difference in our community and they all deserve to be recognised.”

Mr Vasta will be presenting this year’s winners with their awards at a special ceremony on 1 June 2018.

Nominees this year include:

• Marian Sheffield – Community volunteer for a number of clubs in the Wynnum-Manly area including Acacia Bayside Swimming Club and Annette Roselli Dance Academy;

• Bruce Meers – Carindale local and life-long volunteer for a number of local charities and clubs;

• Alex Wright – Mansfield local and long-time volunteer for a number of clubs and organisations including Volunteer in Policing and Mansfield Neighbourhood Watch;

• Carindale Cougars JAFL Club – A small, grassroots football club that has grown to over 100 members on the back of many dedicated Bonner parents who volunteer their time with the club;

• Gumdale Hub – Linda Pascoe has brought the community together to fight crime in the area through this local Facebook page;

• Making a Difference Team – This Manly West-based team regularly helps and organises donated items for the homeless or people trying to restart their lives.